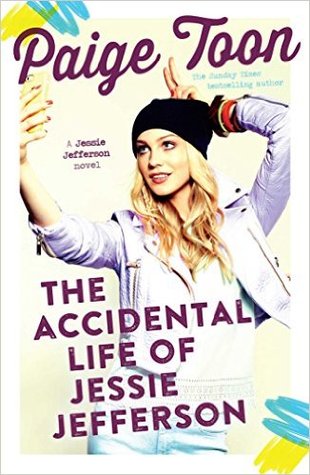 ‘Meet Jessie, the daughter of Johnny Jefferson, as featured in Johnny Be Good and Baby Be Mine…

My fifteenth birthday was the worst day of my life, and it’s inconceivable to think that any single day in my future will ever be as bad. My mum was killed in a freak accident on her way to pick up my cake. Even when there was still no sign of her after two hours later, and my friends started to arrive at our house, it never occurred to me that she wouldn’t be coming back.

That was six months ago. My mum died without telling me who my real dad was. And for a while I hated her for it. I thought she’s taken the secret of my father’s identity with her forever. But she didn’t. Holy hell, she didn’t. Because three weeks ago I found out the truth. And I’m still reeling from the shock of it. My dad is none other than Johnny Jefferson, mega famous rock star and one-time serial womaniser. And now I’m on my way to LA to meet him and his family.

My tiny little world has just got a whole lot bigger…’

Firstly, don’t you just think Paige Toon is just the most amazing name for an author? I am not sure if it is her real name, but if it is, then wow! Well done to her parents for that. I think I might just use her name as much as possible in this review, just because I can.

Anyway, this book was Paige Toon’s first delve into the world of YA fiction, after being a well loved adult fiction writer. I do have to say, it was definitely the right choice, because it was such a fun read, one that is perfect for getting you into the summer mood. I am extremely glad there is a second, and soon to be third book, so I can jump right back into this, and reunite with the characters that made the story what it was.

To begin with, I wasn’t the biggest fan, especially not of Jessie (she was annoying to begin with), and I will be honest (honesty is what you want anyway), I wasn’t sure I was going to like it at all, but my doubts vanished quicker than you can say Paige Toon (subtle). I practically flew through it, which I was over the moon about, until the last chapter when I knew it was coming to the end. Frankly, it was upsetting, so the moment it was over, I looked online at one of the libraries I am signed up with to see if they had a copy of the next book, which it turned out they did, and reserved it instantly. BAM! I am waiting for that email to tell me it has arrived.

This book will definitely appeal to music fans everywhere, as well as anyone who just wants to know where they fit into this big world we live in, just like our main character, Jessie, who is unsure even when she finds her family.

Life can be confusing, and decisions can be difficult to make, and that is what I love about what Paige Toon has done with this book, showing the harsh truth about life, even when it looks like you have everything made for you.

Title: I Was Here

As Cody numbly searches for answers as to why Meg took her own life, she begins a journey of self-discovery which takes her to a terrifying precipice, and forces her to question not only her relationship with the Meg she thought she knew, but her own understanding of life, love, death and forgiveness.

A phenomenally moving story, I Was Here explores the sadly all-too-familiar issue of suicide and self-harm, addressing it in an authentic way with sensitivity and honesty.’

Gayle Forman, the author of one of my favourite books, If I Stay, managed to wow me and take my breath away once again, but this time with I Was Here. I love her writing style, and story telling, but why always death Gayle? Why?

The main characters are Cody, who we follow throughout, and her best friend Meg who just like Marley in a Christmas Carol, is dead to begin with, but remains at the forefront of everybody’s minds, especially Cody’s.

From the very beginning, Cody gives off a sense of being in control and having complete confidence, but we soon learn that this is just a facade, as later on you see her as timid and more frightened than she will want to let people know. There is this vulnerability which allows for the audience to feel connected to her.

Meg as a character is also lovable, but is portrayed as being almost perfect. She had characteristics of someone I could not relate to at all. She was a bit unrealistic to me, but I still felt bad for her.

The main plot idea revolves around Cody who leaves for Tacoma, the place where Meg had attended University. She clears out her stuff and leads to her doing a proper investigation into her best friends death, as certain details didn’t quite add up.

Whilst there, Cody befriends some of Megs roommates, as well as meeting Ben Mcallister, a guy Meg was infatuated with. There is a romantic connection between the two, but I feel as though it wasn’t explored enough.

This is the perfect book for anybody who wants to be broken into pieces and taken on a journey of emotion.