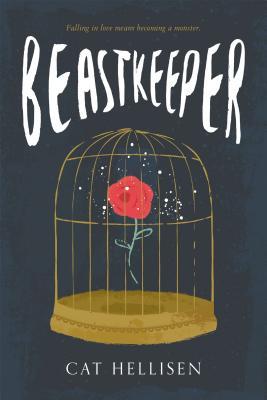 Sarah has always been on the move. Her mother hates the cold, so every few months her parents pack their bags and drag her off after the sun. She’s grown up lonely and longing for magic. She doesn’t know that it’s magic her parents are running from.

When Sarah’s mother walks out on their family, all the strange old magic they have tried to hide from comes rising into their mundane world. Her father begins to change into something wild and beastly, but before his transformation is complete, he takes Sarah to her grandparents—people she has never met, didn’t even know were still alive.

Deep in the forest, in a crumbling ruin of a castle, Sarah begins to untangle the layers of curses affecting her family bloodlines, until she discovers that the curse has carried over to her, too. The day she falls in love for the first time, Sarah will transform into a beast . . . unless she can figure out a way to break the curse forever.’

Growing up, you probably remember the fairy tale Beauty and the Beast, right? Of course you do, because there is soon to be a new version featuring Emma Watson coming out in the near future, which I know many people will be excited for.

The reason I bring it up, is because Beastkeeper is a book which manages to capture the essence of the well loved classic, but with a modern twist added, for a new age. For some reason, this style of book seems to be really taking over at the moment, giving the stories we fell in love with when we were younger, a new lease on life.

The book itself isn’t particularly long, around about 200 pages, but I found it to be quite slow paced, at least for the first half anyway. It took a while to get to the main point of the story, which made it slightly hard to get into. I had to keep putting it down because at times I felt my eyes beginning to close. However, once I surpassed the halfway mark, I felt things turning round, and I ended up getting the enjoyment I wanted from it.

The twist in the book, is not what I originally expected. When I first read the synopsis I thought it was going to be something else, but no, it was almost completely opposite. I did like it the more I read, but I just thought it would have been better if it was what I thought. I was a bit disappointed with that.

My favourite thing about this book was the involvement of magic in a land which at first appears to have none, as well as how the different characters seem to react to it. Our main character, Sarah, was at first reluctant to believe, but was well developed in the short amount of pages, and really grew on me, as she learned to accept what she is, as well as the people around her for what they are.

If you are looking for magic, curses, and the love of family all in one place, then this is the book for you.

In Romantic movies there are a few things that you are likely to see over and over again, and for some reason, we love them for it. They may have similar ideas, but they wouldn’t be the same if we didn’t see the following:

Popular Guy Falls Deeply In Love With The Geek (or the other way around):

Classic! If you are popular, you are expected to be with the person who is similar, but most times, these movies end with them picking the one who their friends and the people around them would least expect. Just goes to show, you shouldn’t judge someone until you know them!

For some reason, most love stories include people seeing each other for the first time, and knowing straight away that is the person for them. If that were real, I would be a little cautious, but it works in movies.

Just Wanting Them To Be Happy:

When the problems occur, the dramatic scenes are added, and usually this is when you find out, they just want each other to be happy. Cute!

Figuring Out They Are The Only One For You:

A true love story, is all about people who are just made for one another, even if other people may stand in the way, it will always be about the two of them, and that is it.

The girl, or guy, has some flaws, and the other person in the relationship manages to love them regardless, and is very accepting of them for it.

I always told you I would be topical so I am going to be.

It is almost Valentines Day, but I am not in love, nor am I currently seeing anyone. I am in no rush to either, although a lot of people think it is weird that I am still single. So what if I am single? It’s my life and I have a right to want to be alone until I am ready to be with someone. So why people judge, I don’t know why!

However, I must say, I have liked people in the past, to the point that it hurts when they casually mention their girlfriend to you. Thanks for that!

Basically, what I am trying to say is, I have no one for Valentines Day. Just the mention of that day makes me feel terrible about myself, like I am not good enough, but when people do like me, I never notice anyway until it is too little too late. I am clearly not the most observant person in the world.

I am doing this post because I hate how some people define you by whether or not you are in a relationship. Why would you do that? Just because someone is not with someone, does not make them any different, or any less happy than you may currently be. I am happy for those who have someone, but also for those who don’t.

Obviously, it is good to celebrate your relationship with Valentines Day, but love comes in all shapes and forms, so why aren’t they also explored with a special day. I love my friends and family, and that is important, or should be anyway. I think we should at least acknowledge these as well so right now I am going to for those who don’t.

*I do not own these pictures.

To all my friends, family, and of course my followers, I love each and every one of you! I just love everyone.

Actually talking about my followers, I think it is important to mention that yesterday we have reached over 300 followers!!! Wooo!

YOU ARE ALL THE GREATEST PEOPLE EVER!!!

Oh and thank you all for the lovely birthday messages 🙂 I hope you loved the Psych gifs. I chose them because I LOVE them!!!